The first step to using a disposable camera is getting one from the market that you can use. There are many types in the market, and it is quite easy to use if you follow the normal methods to use them.

Before taking shots your disposable camera, you need to take the protective plastic cover off the lens. If not removed, you could end up with very blurry pictures.

Like any other modern camera, your disposable one needs light to take good pictures. If possible, try to avoid using it in a dimly lit room. Read further to find out how you can effectively take good pictures with a disposable camera alone with some easy maintenance tips.

What Is a Disposable Camera and How Does It Work?

A disposable camera is a simple camera consisting of a plastic lens, a piece of film, and an automatic flash mechanism. Also, the film is preloaded into the camera. However, you cannot remove or reload the film. This basically means when the final picture on the roll is taken, you have to dispose of the entire camera. 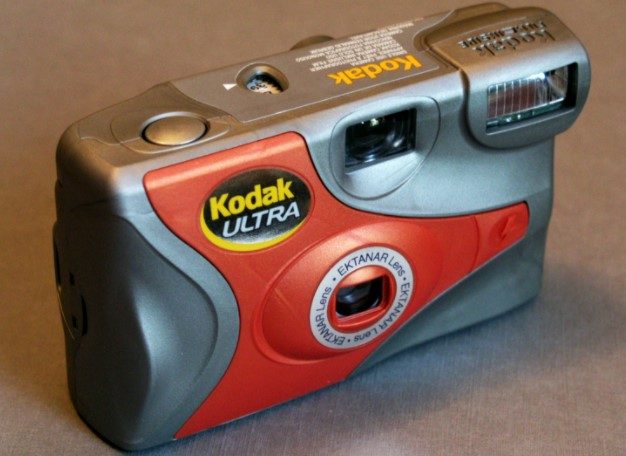 Basically it is a simple way to capture memorable events. Unlike many modern cameras full of options and automatic settings, disposable cameras have a fixed lens and light measurement. Besides, most disposable cameras also have a flash.

That’s pretty much it!

Simple and easy to use, disposable cameras capture the moment while keeping you focused on the fun.

In addition, they are durable and weatherproof, making them ideal for all occasions, including weddings, birthday parties or other special events, or even just everyday snapshots. Many people prefer disposable cameras over digital cameras because they do not have to worry about a long-lasting battery or memory capacity.

Additionally, disposable cameras are already loaded with high-speed colour film, making it easy to take photographs in any situation. Most models can take up to 20 or 27 shots before developing. In addition, they are designed to survive extreme temperatures and are waterproof.

How to Use a Disposable Camera?

If you want to use a disposable camera, you need to learn how it works and use it accordingly for the best result.

Here’s a complete guideline you can follow to take pictures with a disposable camera.

Remove the Lid on The Camera

Most disposable point-and-shoot cameras utilize a plastic lens cover. Check the front of your camera to see if it has a door or cover blocking the lens. The smaller shape and style of these cameras require that you practice holding them still to avoid shaky photos.

To get started, remove the lens lid. The camera is now on standby mode and ready to take a picture. When you see something, you want to shoot, compose your scene and press the shutter button.

Before you can use a disposable camera, you have to make sure there is a film ready to be exposed. Unwinding the film is crucial. Otherwise, your camera will not be ready to take pictures.

Take it out of the light, as light exposure washes away any film that wasn’t used in the camera. Make sure all of the films are unwound; if not, your pictures wouldn’t come out perfectly.

Also, if you have purchased a disposable camera, the film is likely to be loaded or not inside of the camera when you buy it. So, if it is not loaded, you will have to load the film into the camera yourself before taking any pictures.

The next step is to set the flash. With most cameras, there are three different “modes” to choose from: on, off, and automatic. To access these modes, you must pull up or push down (in some cases) on the switch that reads “flash.”

The three symbols are usually next to each other, so you just have to switch one way or another to change the mode. If this doesn’t work, consult your manual.

Hold the Camera and Focus on The Object

You should hold the camera as steady as you can, and be sure to hold it close to your eyes. Focus the subject in front of the camera using the dial next to the lens, and don’t forget to click.

Once you have the target you want to capture in sight using the viewfinder, you can press the button on the camera to take the shot. It is as simple as that. You need to do this until you finish the roll.

You need to develop the disposable camera film after you are through with using a full camera roll. Only the manufacturer can do it.

Before you take your film to be developed, be sure you’ve used all of the exposures available on the film. This will ensure that all of your photos have been scanned, and you can upload them to your computer.

How To Take Care Of Your Disposable Camera?

It does not matter whether you have an expensive camera or not; if you do not know how to take care of it, you will never get good photos and likely damage it. However, there are some ways to take care of your disposable camera so it can outlive its lifespan. 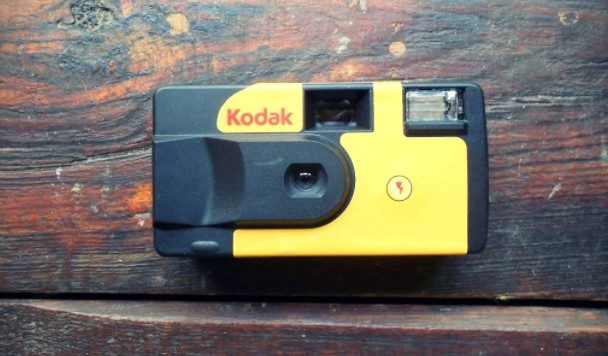 Keep your film camera clean, dry, and safe from oil, dust, scratches. Also, make sure to store it in a cool place, inside the hard case. This will keep away dust and scratches, which can eventually cause your photos to blur.

Use a Bag to Keep Your Camera

It is recommended that you put the camera in a bag or container in a dark, cool place when you are not using it. Try to avoid storing it on exposed areas or put it under broad daylight. Also, when you get a bag for the camera, ensure you do not put other items inside it that can damage the camera.

Do Not Use It at Extreme Temperatures

Don’t use your disposable camera in the high heat of a beach day or the cold of a snowstorm. Taking a picture in extreme temperatures may result in poor image quality.

Also, extreme temperatures can damage the film. To protect the film and camera, always keep it at room temperature until ready to use. Then, immediately replace it in the carrying case after use, and avoid storage in a car or other environment where the camera will be exposed to extreme heat or cold.

Learning how to use a disposable camera is actually quite easy as you don’t need any exclusive knowledge on photography. These cameras save you from setting up the exposure, focus, shutter speed, and all those hard-to-learn procedures of photography. However, just make sure you take good care of the camera as any damage to the lens can lead to poor photo quality.